3 Day Trip to Iceland: Disasters in the Snow

On our second full day in Iceland we visited Blue Lagoon, a Geothermal Spa and one of the most popular attractions in the country.

We’d booked to visit Blue Lagoon online a few weeks before we arrived and got a deal that included transport there and back via coach from the bus station in Reykjavik. I definitely recommend this rather than getting a taxi if you’re trying to watch the pennies.

On the journey to Blue Lagoon we went through the Grindavik lava fields, which were pretty cool with endless sights of black rugged volcanic rock covered in snow. On arrival to the Blue Lagoon we queued up with our order confirmation to get our wristbands. The electronic wristbands are used as locker keys and to pay for your expenses during the day. At the end of your stay, you hand in the wristband and pay for everything that you bought, ate and drank. This means that you don’t have to bring money around with you in the lagoon. You can get four different ticket types for Blue Lagoon, including Standard, Comfort, Premium and Luxury. Standard, which we went for, includes just entrance to the lagoon whilst the other tickets offer luxury items such as gowns and a meal at the on-site restaurant. 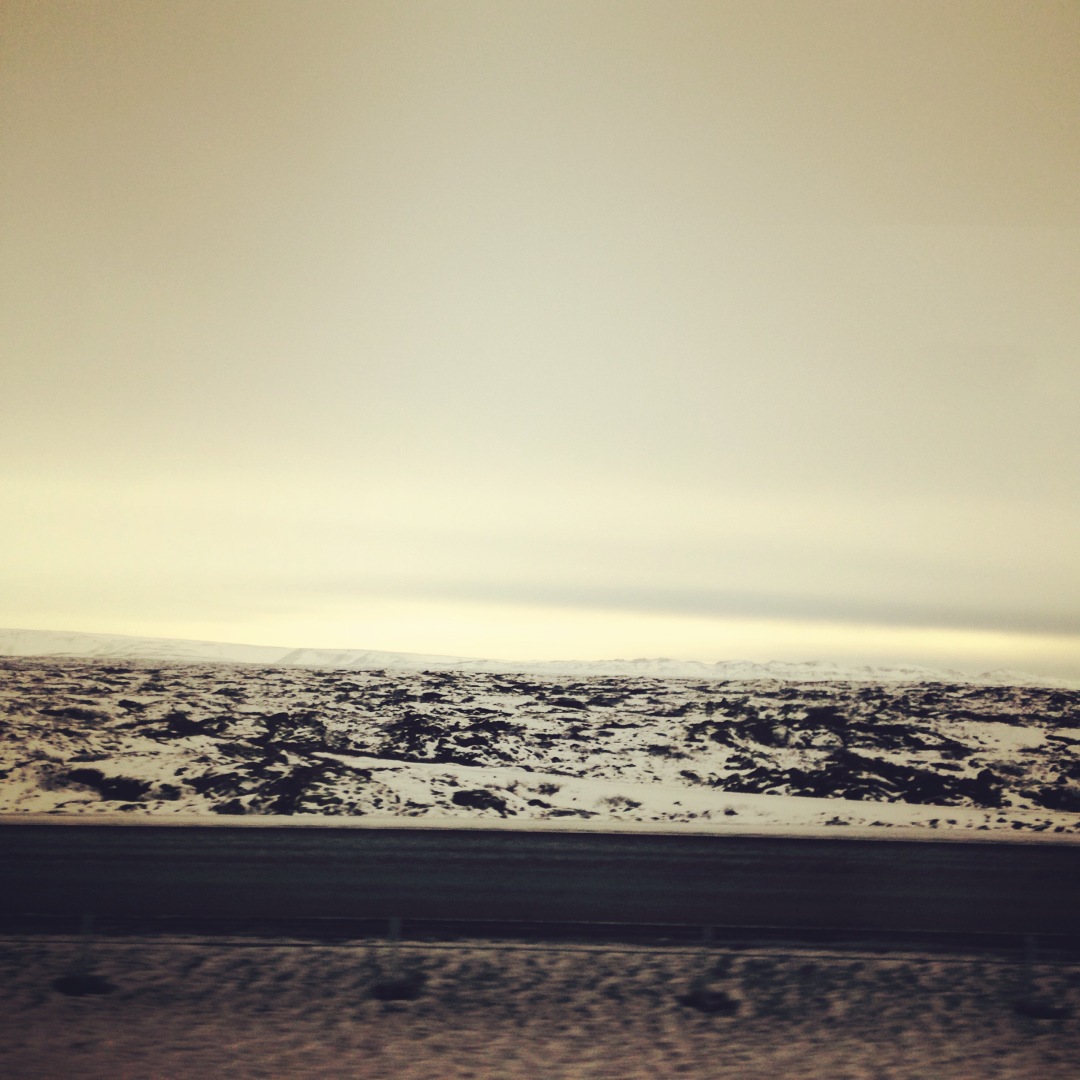 After changing into my swimming costume, I realised that I’d lost my wristband, which you have to pay a fee for if lost. I scoured the changing rooms for about half an hour before giving up. As I couldn’t lock away my clothes and towels, I had to bring them all into the lagoon lobby so that Josh could lock them in his.

The lagoon itself was incredible. The temperatures outside were sub-zero but it was only quick run into the toasty blue water. The water really is as vividly blue as the pictures show. We spent the day lounging about the lagoon and taking in the sights of the surrounding magnificent jet black mountains. Steam rises from the surface of the turquoise lagoon into the crisp Icelandic air. You can get a free silica face mask, use the saunas and buy a drink from the pool bar. We stayed until dark and the few golden lights dotted around the lagoon illuminating the mountainous crevices and the rising steam creates a surreal and cinematic illusion.

Once we returned from Blue Lagoon, we were surprisingly tired and ravenous. It was late and we didn’t think many restaurants would be open at that hour so we decided to order a take-out. Whilst choosing our pizza, the door of our room slammed open. It was the host and the owner of the apartment. We hadn’t met her before that day because she’d been away in her holiday home across Iceland. Josh embarrassed himself by leaning in for a hug but obviously Icelandic people don’t often do this has she recoiled and gave him a strange look. She then proceeded to tell us off for the mess of our room and storing drinks in the main fridge rather than our guest fridge- of which we had no idea existed until then. I was a bit annoyed that we were treated like children but it being her house we were respectful to her and her wishes. Afterwards we had a chat in the kitchen. As she’d been a tour guide around Iceland’s natural wonders for most of her life, she was well informed on the best places to go. We wanted to spend our last day hiking or at least seeing the mountains more up close. However, she let us know that due to the time of year we had visited, there were few places it was safe to hike without experts or experience. She highlighted the dangers of the mountains in that season, saying that the snow could get up to five feet deep and could also conceal hidden hot springs that were much hotter than the ones at Blue Lagoon, too hot to touch. Deterred by the thought of being drowned in snow, freezing to death or being burnt alive, she recommended the small town of Hveragerdi for a day-trip. She said it was a cute town right within the mountains, where we could explore.

We decided to use the public bus system to get to the town and it was about a two hour journey getting there. The views from the bus were spectacular though as we drove through the snowy plains and mountains.

The bus arrived outside a petrol station and we immediately could tell how isolated the town was. Going into the petrol station to get some snacks and drinks, the owners gave us strange looks. They clearly weren’t used to having tourists milling about on early February afternoons. Opposite the petrol station was the ruins to some sort of building, where beautiful art had been painted. We perused the art and then wandered further into the town, up a steep hill towards the mountains. The sun began to set, giving the snowy mountains a glorious golden colour. The road was too icy to walk on and on the pavements, the snow was knee deep. It was absolutely freezing and we had to keep moving to stop the cold from becoming too unbearable. The town was definitely more of a residential area than a tourist destination. It was lovely being away from the crowds and seeing the mountains and nature close up. We took a walk along the icy river and enjoyed the mini waterfall. However, only a few hours later it started to get dark and we realised the error of not starting our day much earlier. Attempting to navigate our way back to the bus station was difficult, both our phones died and with the sun setting and a lack of public services I was beginning to worry we’d be stranded in this town, isolated and freezing cold.

I was getting increasingly worried when we somehow realised we’d found ourselves back on the main road. In the distance we could see the last bus to Reykjavik and we desperately half-ran down the icy street whilst trying to avoid breaking our necks. Luckily the bus waited for us to get on and we got a cosy seat back to Reykjavik in the dark.

On our last night we went to Shalimar, a Pakistani restaurant on the high street. We thought it would be pretty good value for a 3 course meal deal for the equivalent of €25 for both of us. The portion sizes were pretty measly and the naan bread was pretty much garlic bread but we weren’t too fussed until we found out that we had misread the menu and it was actually €25 each! We’d spent €50 on a sub-par curry. Again, we felt we’d been ripped off by the food in Reykjavik.

After the meal we went to the lighthouse to watch the Northern Lights but after a couple of hours freezing our tits off staring at the sky with cricked necks and enviously sniffing at the people waiting in their warm cars, we gave up and got a taxi back to the apartment with an air of disappointment.

Iceland is probably the most beautiful and unique place I’ve ever visited. It’s an absolute winter wonderland but I still wish the circumstances of our stay had been different. If we’d gone later in the year, when the weather wasn’t quite so unbearable, had a bit more money saved up and could drive, it would have been the most incredible experience. However, we were sadly limited in our options and the natural wonders we were so excited to see were a bit outside our reach with the poor transport system in Iceland. Next time we’re in Iceland, we’ll definitely rent a car and experience an epic road-trip like this.

Read more: for spectacular pictures taken by someone who didn’t fail to see the Northern Lights, check out Ryan’s blog here.

P.S. A big thank you to my lovely boyfriend Josh for taking me to Iceland, I couldn’t ask for a better travel buddy.

Iceland: A Winter Weekend Trip to the Land of Ice and Fire

This site uses Akismet to reduce spam. Learn how your comment data is processed.

I'm Tasha, a 24-year old English girl born in London and currently based in France. Welcome to my travel journal. I hope you enjoy following me on my adventures across the globe.