For my boyfriend’s birthday I bought us both train tickets to Snowdonia National Park in North Wales to camp for 3 nights. After the lessons learnt in our failed wild camping experience in Northumberland, we booked a spot in a campsite in the centre of the National Park, close to Mount Snowdon.

We left our homes in Leeds bright and early for our 6:30am train on the 6th June ready for a day full of travelling to our campsite and with backpacks fit to burst full of camping gear, clothes and food. Despite only going for 3 nights we knew that on our low budget, we’d have to try and feed ourselves the duration of the trip and packed tins of chickpeas, couscous and beans, making the bags super heavy. Two trains got us to Llandudno Junction where having a 45 minute stopover we initially planned to take a look at Conwy Castle, near the border of Wales. However, after some speculation we decided it was worth the risk missing our connecting train so stayed on the platform for some lumpy station coffee instead.

Our train to Blaenau-Ffestiniog gave us our first incredible views of Snowdonia, soaring through glorious mountains and forests, castles and bridges. I was immediately hooked on Snowdonia on my first glances; I had no idea somewhere in the UK could be so lush and green, so much of our land is stripped down by agriculture and boxed into squares of crops and fields. This was something else.

We arrived in Blaenau-Ffestiniog at 11:30am. It’s easy to see why it’s called the town of slate, with piles and piles of it slumped up against the surrounding mountains. The first shop you see as you exit the train station is a gift shop, full of slate. We still had to get two buses until we were at our destination, the first bus taking us to Porthmadog, a port town on the coast of Snowdonia.

Porthmadog was absolutely lovely and we stayed there for several hours, choosing to skip the next bus so we could spend some more time exploring. We ate at Jenny’s on the main high street and I totally recommend this place for a lunch-time meal; it’s a casual, friendly place where you can get a really wide variety of food for quite cheap. We got two large portions of homemade chips and a whole quiche to share for under a tenner, which we savoured knowing that we’d be on dehydrated foods for the next few days. It has a separate restaurant section that we didn’t try and also a lot of bakery that reminded me of the Dutch bakery in Amsterdam as you could buy whole cakes and tarts to take away.

We walked around the port for a bit and looked at the boats and were shocked with how many houses seemed to be going for sale and for cheap too- about a sixth of the price of our Leeds houses. All the houses were so pretty, different pastel colours with garden terraces. After a while lugging our bags around became too cumbersome so we found a nice grassy spot by a lake with a gorgeous mountain view. We waited there watching the swans sail pass until our bus came. 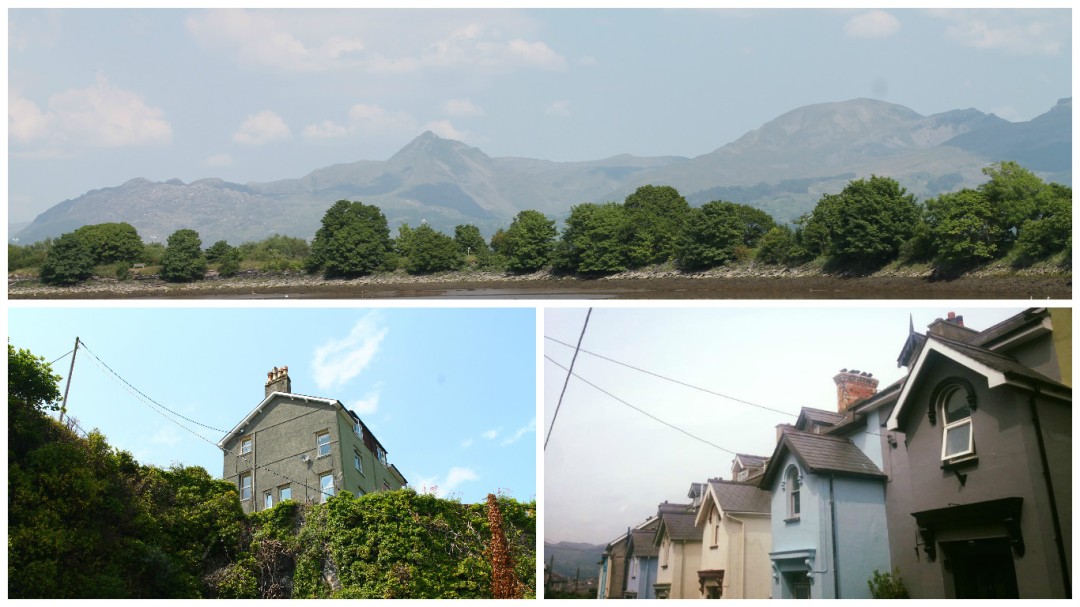 The bus that took us to the village of Beddgelert from Porthmadog was a school bus and it was strange listening to all the school kids talking to each other in Welsh. I had underestimated how prominent the Welsh language was in Wales, assuming that it was a dying language and English had taken over. I was completely wrong- all the signs were firstly in Welsh with the English translation underneath and about half the people where we were spoke in Welsh. However, my friends tell me that in larger cities like Cardiff, less people speak Welsh, which I guess is due to the globalisation of such busy cosmopolitan places.

The bus sped dangerously fast along narrow country roads making us hold our breaths many times going round sharp corners on the edge of a mountain. The forest began more plenteous as we progressed towards the village. A frothy river trimmed with caves and trees ran parallel to the road we travelled on and I made a note to look at the map and find out what it was called later on.

The walk from the village of Beddgelert to our campsite took us longer than expected because Josh’s navigation skills aren’t as great as he makes them out to be and we ended up walking up a mountain unnecessarily for half an hour. However, eventually we made it and the campsite was adorable. The site office was located in a white cottage and wild rabbits roamed freely. We chose to pitch on a spot right by the river, which was lovely to start off with but we soon regretted that decision due to the sheer amount of midges flying about next to the water. The campsite facilities were all great- the showers and toilets were always clean, they weren’t overly modern but no-one expects luxury at a campsite. You could order fresh baked goods to be ready for you in the morning if you gave in a slip with your order the night before. For the next morning we ordered a plethora of pastries and a large baguette.

Once we’d set up our tent we made a dinner of cold couscous and chickpeas and had a wander around the woods for a bit before finally settling down to bed. We were pretty tired from our early start the day of travelling and super excited to explore Snowdonia the next day…

Wondering what other destinations to put on your UK bucketlist? Why don’t you consider Tenby, Wales, a beautiful harbour town in South Wales surrounded by the infamous Pembrokeshire beaches.

This site uses Akismet to reduce spam. Learn how your comment data is processed.

I'm Tasha, a 24-year old English girl born in London and currently based in France. Welcome to my travel journal. I hope you enjoy following me on my adventures across the globe.